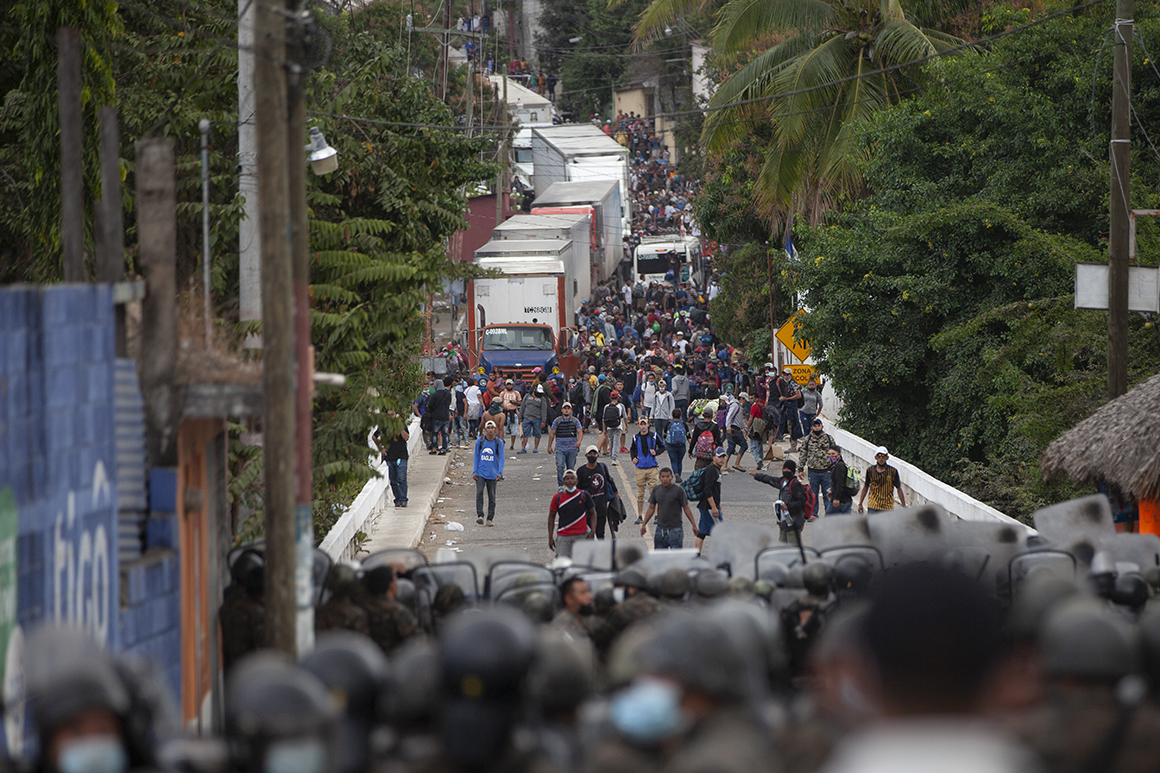 A steep mountain and tall wall flanking the rural highway have allowed Guatemalan authorities to bottle up the group that had numbered about 2,000 when it pushed into Guatemala Friday night.

Their ranks have reduced through attrition as some migrants have agreed to be bused back to the Honduran border. A Guatemalan official repeated that offer Monday morning, telling the migrants they had buses at the ready for those who wanted to return to Honduras. A smaller number have been forcefully sent back after scuffling with authorities who held their line with baton strikes and tear gas.

The primary of objective of the authorities’ midday push was to reopen the highway. Police and soldiers banged their riot shields intimidatingly as an official told the migrants to clear the highway. The migrants scattered, but remained in the general area.

Guatemala’s immigration authorities said Monday that another group of about 800 migrants had been located about 25 miles (40 kilometers) farther north along the highway near Rio Hondo. They are also blocked from advancing there, but authorities said they successfully negotiated opening one lane of traffic so vehicles could pass.

Pedro Brolo Vila, Guatemala‘s foreign affairs secretary, criticized Honduras’ government Monday for not doing more to dissuade the caravan. He said Guatemala had been preparing since December for this caravan, including meetings with their counterparts in Honduras, Mexico and the United States.

Guatemala was “totally surprised” by Honduras’ lack of cooperation, Brolo said. He said Honduras had promised to put out a large contingent of security forces to dissuade the migrants from reaching Guatemala’s border. Instead, Honduran security forces accompanied the migrants “toward our borders where regrettably we saw how they entered violently, violating Guatemala’s territorial sovereignty.”

He also said Guatemalan authorities had detected fake Covid-19 test results among the migrants who stopped to register their entrance to Guatemala.

In total, some 8,000 to 9,000 Honduran migrants were believed to have entered Guatemala in the year’s first caravan after departing from San Pedro Sula, Honduras early Friday. Honduras has been battered by the Covid-19 pandemic and two major hurricanes that struck in November, leaving thousands homeless. That’s on top of the existing lack of economic opportunity and persistent gang violence.

In Vado Hondo Monday, site of the roadblock outside Chiquimula, migrants leaned against the wall or sat up after a fitful night’s sleep in the brush along the road or on the pavement. Some migrants had drifted back to the town in search of food or shade to wait out the stalemate.

Traffic, especially semi-trailers, were backed up for miles. Locals picked their way among the migrants and were allowed to pass the lines of police and soldiers.

On Sunday, Guatemala’s Health Ministry reported that 21 of the migrants who sought medical attention at health centers had tested positive for the coronavirus. The department said the 12 men and nine women would not be returned to Honduras until they undergo quarantine at centers in Guatemala.

Even if the migrants manage to find their way to the Mexican border, that government has made a show of force with thousands of National Guard members and immigration agents waiting there.

Mexico has said it would enforce its immigration laws and require an orderly crossing. One year ago, Mexican guardsmen broke up a large caravan in southern Mexico after the migrants forded the river that divides it from Guatemala.

“We are proposing that they seek a dialogue with the migrants, in Honduras, Guatemala,” President Andrés Manuel López Obrador said Monday. “They should attend to them so that they don’t enter any country by force.”

The president said he also hopes to hear Biden address immigration in his inauguration speech Wednesday.

“I believe that the time has come to follow through on the commitment to carry out immigration reform,” López Obrador said.