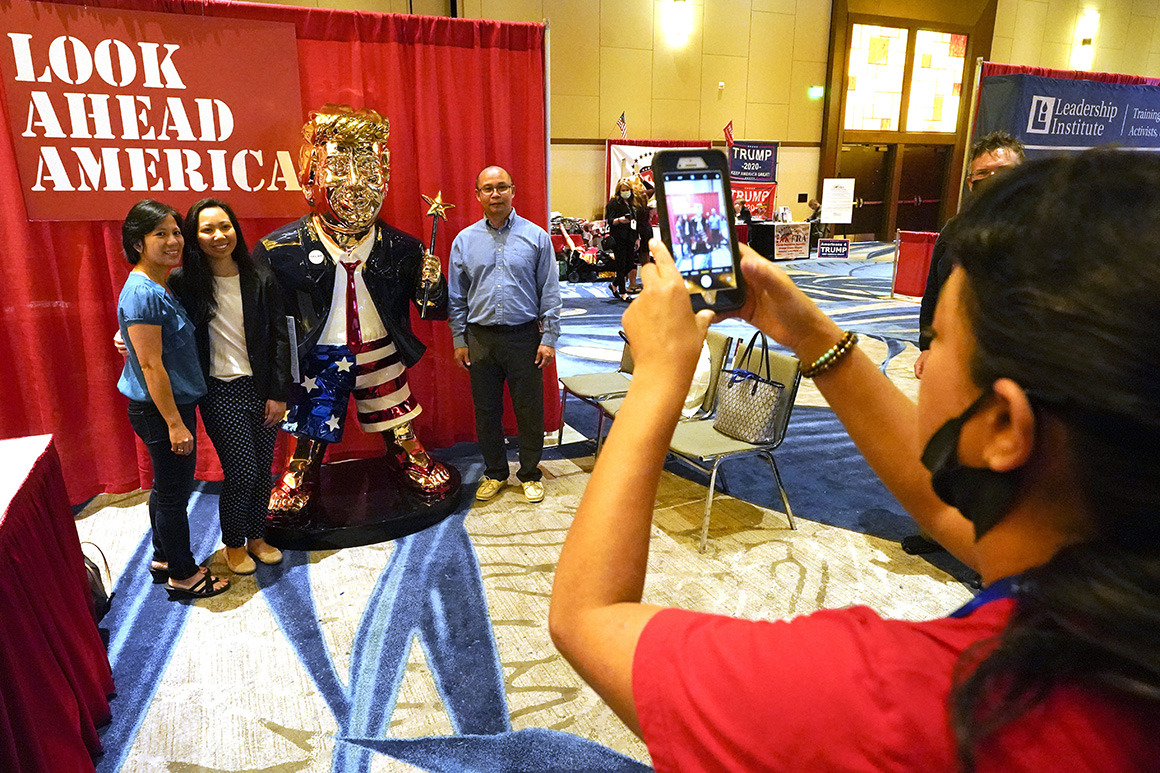 Ronald Reagan, the president who reinvigorated the Republican Party, promoted the GOP as the “party of new ideas” on his way to a landslide reelection in 1984.

In the post-Donald Trump era, judging by the fare inside the Orlando ballroom where the Conservative Political Action Conference unfolded, the GOP has evolved into the party of precisely two ideas: re-litigating Trump’s defeat and seething over the de-platforming of the former president and his supporters.

At the first major gathering of Republicans since Trump left office, conservatives spent the weekend clinging to the false claim that Trump’s presidency was stolen from him and raging over the perceived “cancel culture” of Big Tech and the left.

Nearly four months after the election and one month into Joe Biden’s presidency, the politics of grievance has become the near-singular organizing principle of the post-Trump GOP. And whether at CPAC or in statehouses across the country, policy prescriptions for restoring so-called voter integrity have emerged as the primary focus of the party’s energy.

“There are two things the conservative grassroots care about more than anything else,” Charlie Kirk, a conservative activist and founder of the youth movement Turning Point USA, said at CPAC. “No. 1, restoring election integrity in our country for fair and free elections. And No. 2, it is challenging Big Tech, it is giving us the ability to speak freely on social media.”

Much of the intellectual and legislative thrust of the Republican Party nationally remains grounded in the election and its aftermath — a preoccupation sparked by the former president’s unfounded claims that the election was stolen from him through voting fraud and other means.

In Georgia, where Democrats not only beat Trump in November but flipped the U.S. Senate in the runoff elections, the Republican-controlled state Senate on Tuesday approved a bill requiring an ID when requesting an absentee ballot. The following day, it was a bonanza across the country. The Iowa House passed a bill designed to limit early voting. In Missouri, the Republican-controlled House passed legislation that would require a photo ID at the polls, while a legislative committee in Wyoming moved forward with a similar bill.

The Brennan Center for Justice is tracking more than 250 bills to restrict voting by lawmakers in 43 states.

Benjamin Ginsberg, an elections lawyer who has represented past Republican presidential nominees, lamented the death of the “ideas factory” in the GOP.

“Tell me what the innovative Republican policies have been of late?” he said. The focus on re-litigating the last election is “probably a sign that the Republican Party is mired in a bit of a policy wasteland and doesn’t know which way to turn to get out.”

Alberto Gonzales, the former attorney general in the George W. Bush administration, said “all Americans should be concerned about election integrity.” But with no evidence of widespread fraud beyond normal irregularities, he said, the focus by some in the GOP on the last election is a “big distraction” from issues that are more pressing to the electorate.

There is nothing to suggest that Trump, who will speak at the convention on Sunday, is letting go — or that the party’s rank-and-file is prepared to pivot away from his claims that the election was stolen from him, despite more than 60 losses in election lawsuits challenging the presidential election.

It hasn’t always been this way in the Republican Party. Last year, CPAC’s theme was “America vs. socialism.” The year before that, there were no fewer than three panels focusing on the challenges posed by a rising China. This year, CPAC did not go off without an airing of the party’s greatest hits: trade, China, immigration and abortion. And there were shoutouts for Milton Friedman and Ayn Rand. But the fallout from November was the main fixture — in the Republicans’ frustration at de-platforming and the seven-part exploration of “protecting elections.”

In part, the party’s lack of a more forward-looking posture is a function of its sudden dearth of power in Washington. The GOP is settling in as an opposition party — with conservatives constituting what Sen. Ted Cruz of Texas described at CPAC as “the Rebel Alliance.” But there is little room for innovative, policy-focused conservative thought in a party so in thrall to one leader — a leader obsessed with the notion that he lost in a rigged election.

Ken Khachigian, a former aide to Richard Nixon and chief speechwriter for Reagan, said the Republican Party today doesn’t have “a singular voice like they had with Reagan, for example, or Bill Buckley, the movement conservatives who could get up on a stage and move everyone the way Jack Kemp did back in the day.”

“There’s always hope,” Khachigian said, suggesting that “when you have nitwits like AOC [Rep. Alexandria Ocasio-Cortez] on the other side, it’s not hard to come up with somebody.”

But the backward-looking focus on November and its fallout, he said, is “shooting blanks.”

It may come at a cost. As the Republican Party prepares for the midterm elections and the next presidential primary, it’s doing so as a shell of itself, having lost the White House and both houses of Congress in the span of four years. The last time it carried the popular vote in a presidential election was 2004, and America’s shifting demographics are making it increasingly unlikely that it will do so in 2024 — regardless of attempts to raise barriers to voting.

“It is a party that has been fashioned in the mold of Trump — Trump’s message, Trump’s tactics — and it is perfectly comfortable being a party that is defined by what it’s against,” said Kevin Madden, a former Mitt Romney adviser.

The difficulty for the party, Madden said, is “you become almost toxic as a party brand to larger, growing parts of the electorate. … The limitation of a message and a platform that’s just about disagreeing with the opposition is that it doesn’t speak to the broader concerns or anxieties of a big part of the electorate.”

It’s possible that the party’s fixation on election fraud and on the perceived silencing of those who tried to overturn the outcome will fade. Trump’s effort to contest the election postponed the traditional, post-election period of mourning for the losing party. And because a majority of Republicans still approve of Trump and believe the election wasn’t free or fair, there is a political imperative for the party to mollify them.

Sal Russo, a former Reagan aide and Tea Party Express co-founder, said that “sometimes you’ve got to give some deference to where your base wants to go. … Do I think the Republicans have to get over the election process issues? Yes, because you don’t win on ‘we’re going to tighten up absentee ballot eligibility.’ It doesn’t turn out to vote.”

“I think there’s a catharsis that has to happen,” he said, adding that “it’s probably a good thing that CPAC is spending a lot of time” on the subject.