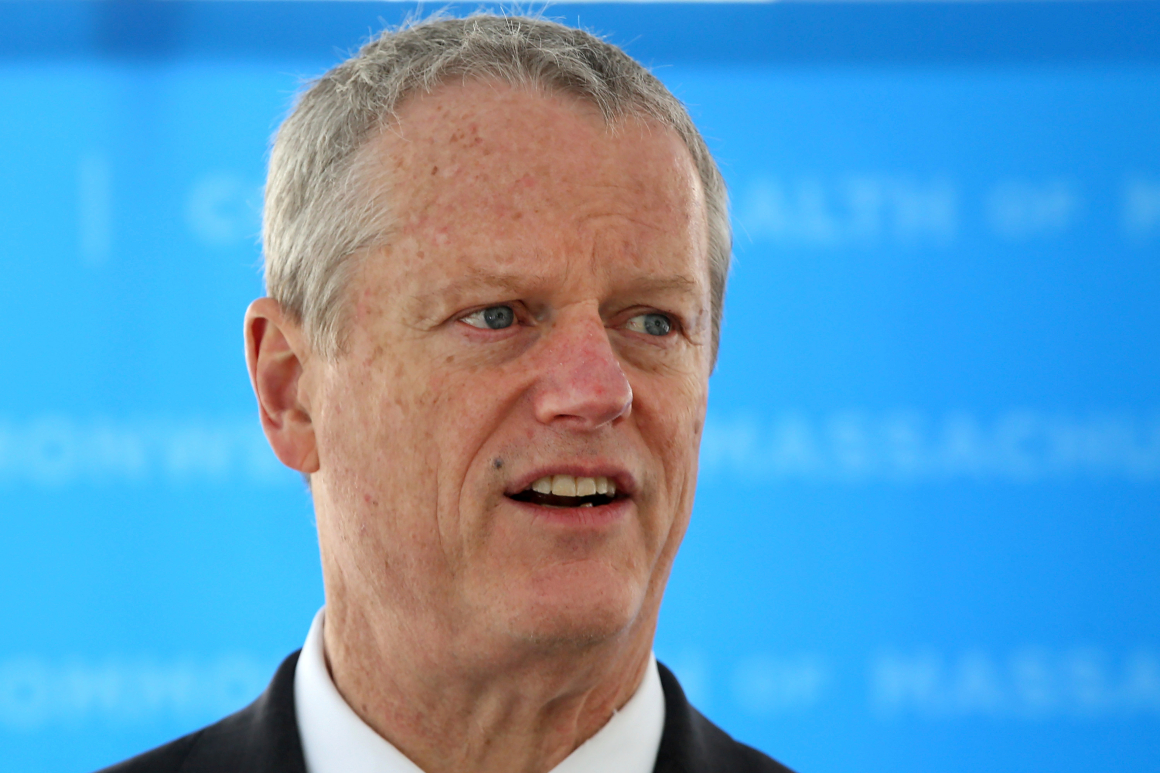 It’s a Trump-era tale of a governor who got on the wrong side of the state’s pro-Trump base, only in Massachusetts it’s a little more complicated. Unlike in many other states, Northeastern Republican governors like Baker and Vermont’s Phil Scott have posted sky-high approval ratings in their states precisely because they rejected the former president and kept a distance from the national party. Now, in a party where loyalty to Trump has emerged as a key litmus test, a vocal contingent of Massachusetts Republicans are questioning whether there’s still a place for Baker in the GOP, despite his record of electoral success.

“The party seems to be on a suicide mission at this point,” former state GOP Chair Jennifer Nassour said. “What the Republican Party in Massachusetts is trying to do right now … is hand the corner office over to the Democrats.”

Despite its reputation as a Democratic stronghold, Massachusetts has elected Republican governors on a fairly regular basis over the past 60 years. Baker shares many of their political traits — politically moderate, fiscally conservative and socially more liberal.

He’s made clear that he’s no fan of the former president: Baker has said that he left his ballot for president blank both times Trump was on the ticket, and wasn’t shy about criticizing the president over the federal response to the pandemic, his post-election machinations or his actions surrounding the Jan. 6 U.S. Capitol riot.

That’s made the governor popular among Democrats, but it’s created long-simmering tensions between the Baker-led moderate wing of the state party and a pro-Trump conservative faction helmed by Chair Jim Lyons, who often signs off phone calls by saying “let’s make Massachusetts great again.”

“[Baker is] a great candidate for Massachusetts,” Republican strategist Wendy Wakeman, a Lyons ally, said of the governor. “But he’s not necessarily the best voice for the base.”

Lyons was once a Baker ally and went to bat for him when the governor was running for reelection in 2018. Then a state legislator, Lyons served as a bridge to conservatives by hosting fundraisers and appearing prominently in Baker’s convention video that year.

He lost his own reelection bid that fall to a progressive Democrat but won the state party chair role at the start of 2019 — and that’s when insiders say the trouble began.

Fundraising disagreements between Lyons and with members of Baker’s team grew into a long-running, public feud that Lyons escalated last winter by asking the FBI and four other state and federal agencies to investigate the state party’s financial operations under his predecessors — including Baker allies.

That rift, Republican sources say, was compounded by internal turmoil on the state committee and longstanding ideological differences between Baker and Lyons that were fanned by Trump. Lyons, who originally backed Ted Cruz for president in 2016, has embraced Trump’s style and partisan rhetoric, arguing that it’s the key to energizing the small Republican base in Massachusetts.

Baker, by contrast, has frequently repudiated Trump, leading some pro-Trump members of the state party to call for a censure of Baker for supporting the then-president’s second impeachment. Others have bristled at what they viewed as Baker’s overly restrictive pandemic regulations, particularly when it came to business closures, with some going so far as to back lawsuits challenging the governor’s emergency powers.

Looking ahead to 2022, some Republicans have talked about raising the bar for the delegate-vote percentage candidates needed at next year’s convention to qualify for the primary ballot, which could, the thinking goes, make things more difficult for Baker.

“There is a hardcore group out there that will vote for anybody but him in a primary situation,” state committeewoman Amy Carnevale said.

One potential alternative has already surfaced: Geoff Diehl, a Lyons ally and former state lawmaker who’s eyeing a gubernatorial bid as a potential political comeback after a failed challenge to Democratic Sen. Elizabeth Warren in 2018.

Lyons and his allies insist they’re not trying to subvert Baker — they say they’re just doing what’s best for the future of a party they believe has been overly focused on keeping the governor’s office at the expense of growing its small base down-ballot. Some in GOP circles even view Lyons as a whistleblower who’s bringing much-needed reform to a party that’s badly outnumbered outside of the governor’s office and losing viability.

“Charlie Baker is a good man,” Lyons said. He’s just “politically not where the Republican Party is here and nationally.”

Baker, normally reticent about getting too involved in state party politics, is taking a more active role in recent weeks. Last week, he slammed party leadership for being out of touch with the “vast majority” of Republicans amid a scandal over anti-gay remarks a GOP state committeewoman made toward a gay congressional candidate. Lyons has rejected calls to make the committeewoman resign, or step down himself.

Baker also responded to recent, unsuccessful Lyons-backed machinations that would have ousted the governor and other elected Republican leaders from a state party committee that controls primary election endorsements — and therefore party resources.

“You mean the only two statewide officeholders who are elected Republicans?” Baker said in response to a POLITICO reporter’s question about the matter at a press conference last week.

“Kicking us off doesn’t make any sense,” Baker continued. “It also speaks to larger issues about just not appreciating and understanding that this is supposed to be a team sport.”

After watching the party lose seats on Beacon Hill and fundraising falter in the years since Lyons took over, some Republicans worry that Lyons — who rode the tea party wave into elected office in 2010 and regularly condemns the “radical left” — has a vendetta against Baker that could cost them the governor’s office in 2022 if Baker decides to run for a third term.

“It makes absolutely no sense that a very popular governor is being literally singled out by a failed former state representative with very little fundraising prowess and a very divided state committee,” said state Rep. Shawn Dooley, a GOP state committeeman who unsuccessfully challenged Lyons for the party chair role earlier this year and frequently criticizes Baker.

“I’m concerned that this is an incredibly dangerous game that we’re playing,” Dooley added. “And if we lose the governor’s office, we’re losing it for eight years.”

Some Republicans say the blowback against Baker is limited to the party’s far-right. They express a sense of hope — albeit waning — that the GOP’s warring factions can call a truce ahead of 2022.

“Our best shot at getting a Republican elected as governor is Charlie Baker,” Carnevale said. “I just think it’s crazy for our party to turn our backs on an incumbent Republican, especially one who’s so popular in a blue state.”